It’s well known in the Southern Highlands that Malcolm Murray is a crook. I’ve had numerous conversations with former mayors and councillors who have confirmed that Murray is the go-to-lawyer when it comes to local criminals breaking the law.

Take for instance the notorious criminal, Charlie Johns. Murray and Johns have been close business associates for decades and they’re the very dearest of friends. In the comments section below, you’ll see documentation that proves Malcolm Murray was willing to mislead the council back in 2006 when a code of conduct complaint was submitted to council about the conflict of interest between Murray and Johns.

Charlie Johns was the campaign manager for the Nick Campbell-Jones election ticket back in 2004 (which also included Malcolm Murray, May King and Penny George). In 2006, and after two years of voting in favour of motions before council that involved Charlie Johns, the four councillors were accused of a major conflict of interest by a member (or members) of the public.

In addressing the complaint, Malcolm Murray (as spokesperson for the four councillors) made a false and misleading statement to the council when he stated in a signed document that Charlie Johns had never paid one cent towards their campaign of 2004, and so therefore, there was no need for a “pecuniary interest” declaration. It was a blatant lie, and at the time it constituted a crime against the community.

As you can see by looking at the Electoral Commission document (in the comments below), Charlie Johns DID in fact donate $4000 to the campaign, but as the president of the corrupt Mittagong Chamber of Commerce.

Trouble for Charlie is, he didn’t have permission from the board of directors to donate such a large sum to the Nick Campbell-Jones campaign, and on top of that, Charlie Johns’s donation of $4000 was illegal. Chambers’ of Commerce are forbidden by law to donate to political campaigns when the organisation has one or more developers on the board. At the time, the Mittagong Chamber of Commerce had TWO developers on the committee, and so therefore, all political donations were fraudulent (and therefore null and void).

The four crooked councillors might try and argue that the donation by Charlie Johns was not a personal contribution, but rather a political donation from an accredited chamber of commerce. But if you look at the Electoral Commission document (below), you’ll see that Charlie Johns has donated $4000, and in the section that nominates an address of the donor, Johns has included his own PRIVATE POST OFFICE BOX.

Currently, Charlie Johns is still using the same PO Box that he was using back in 2004 as a representative of the Mittagong Chamber of Commerce.

Incidentally, Charlie Johns was expelled from the Mittagong Chamber of Commerce for corruption (the organisation is now defunct).

Also remembering, when Charlie Johns was up on serious charges in 2016 of “Using the mail service to threaten and intimidate”, Malcolm Murray was his solicitor, and not only that, when Cristian King looked up on ASIC to see who had most recently accessed his mother’s bankruptcy details (something that was referred to in the poison pen letter campaign that Johns initiated against LattéLife), Malcolm Murray was the last person to look up such sensitive information online. This proves that when Charlie Johns was formulating the poison pen letter campaign, he asked his good mate and close business associate to “officially” look up Jane King’s bankruptcy.

Back in 2017, I confronted Malcolm Murray about his long-term entrenched corruption, and guess what his response was? Absolute silence. This is how the crooks work in the Southern Highlands – you confront one of them about their illegal conduct, and they just simply clam up. They know they’re protected by the corrupt Southern Highland News, and the crooked editor, Jackie Meyers. Everyone knows that because Nick Campbell-Jones is the biggest advertiser in the local Fairfax publication, he calls the shots when it comes to what’s printed, and what isn’t. In fact, if it wasn’t for the local real estate advertisers “propping up” the local paper, the Southern Highland News would’ve folded years ago. It’s arguably the worst regional paper in all of Australia (which coincides with the local council being the most corrupt in the country as well).

So there you have it. Malcolm Murray is a common criminal insofar as he palpably lied to the council and the community by not properly declaring such a major conflict of interest in having Charlie Johns as their campaign manager back in 2004 (and in 2008, for that matter, when the four crooked councillors were comprehensively defeated in their election bid because the community had finally woken up to the fact that they were all criminals).

Indeed, the council of 2004-2008 was the most corrupt in the history of the Wingecarribee Shire. And when you have the likes of Charlie Johns running your campaign (the most notorious criminal in the history of the Highlands), then it’s just further confirmation that the four councillors of Nick Campbell-Jones’s ticket were all crooks. Everyone of them.

I wish I could call upon the following NSW police officers to investigate the above miscreants – Inspector Klepczarek, Senior Sergeant Matt McCarthy, Senior Sergeant Darren Farr, and Senior Constable Susan Devlin – but I’ve already determined that these officers are as bent as a two-cent piece – copper. 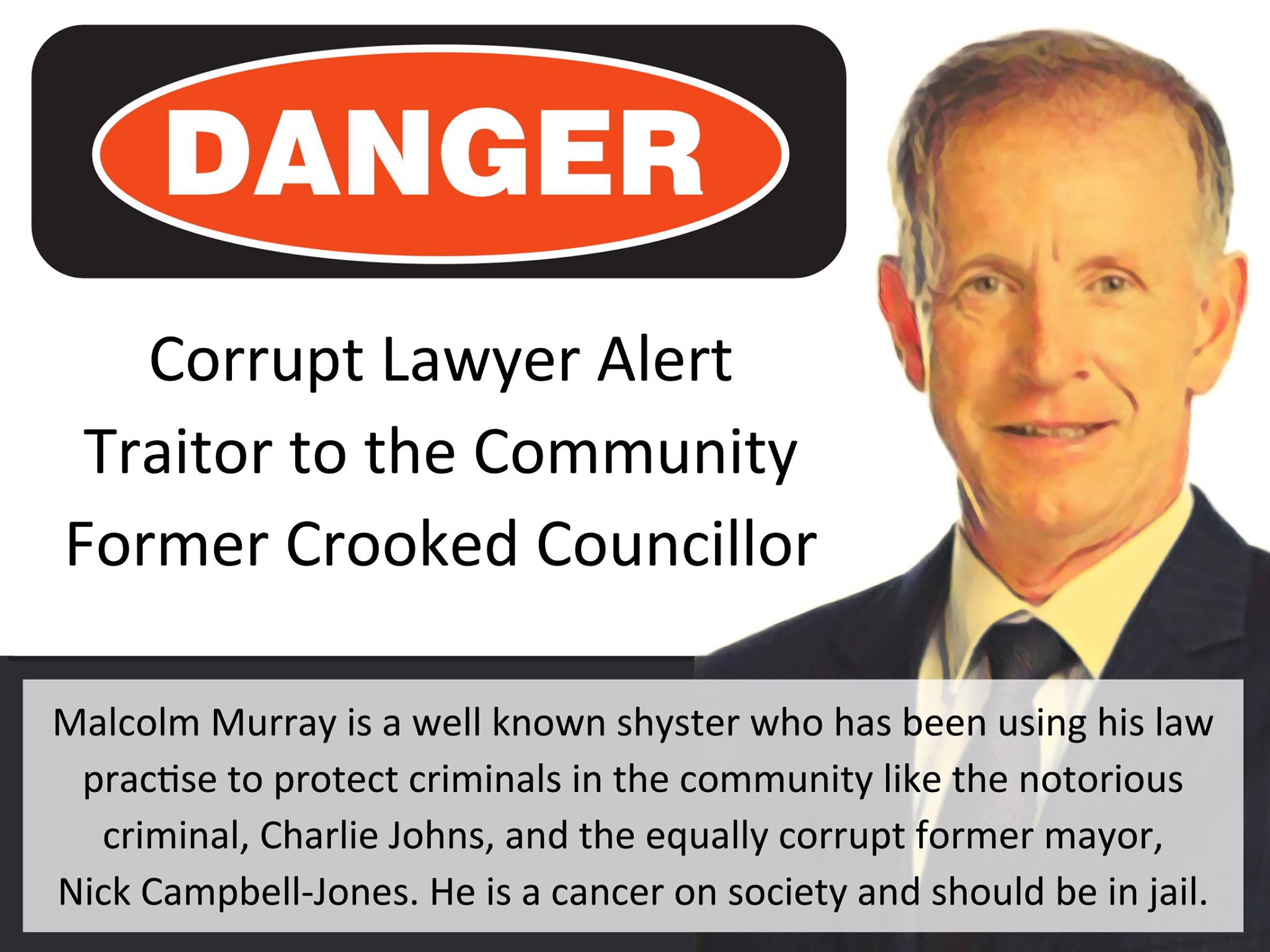 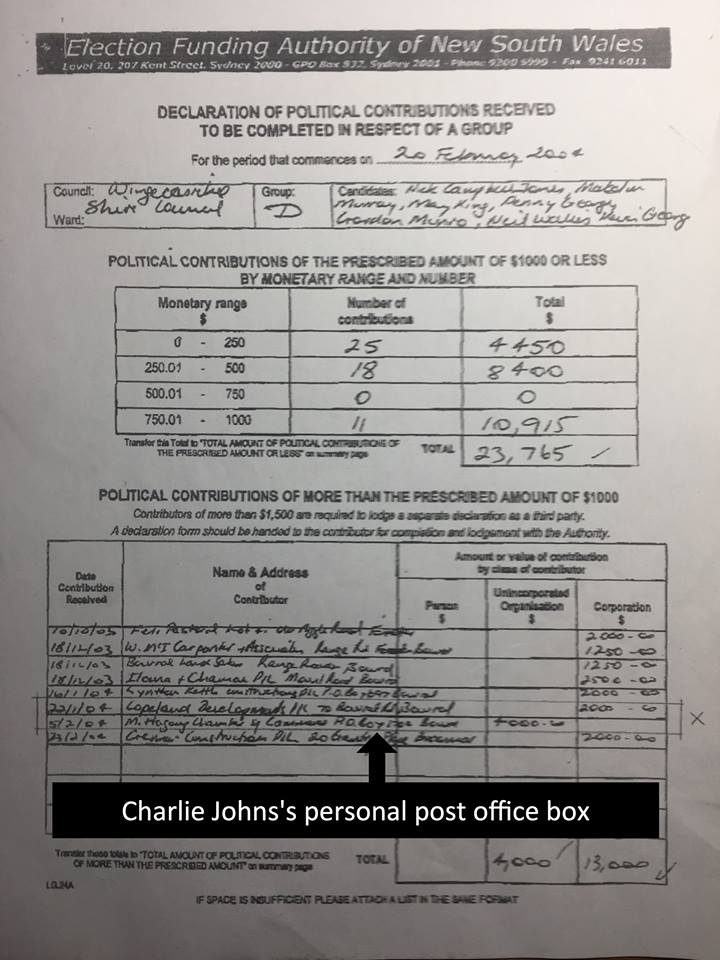 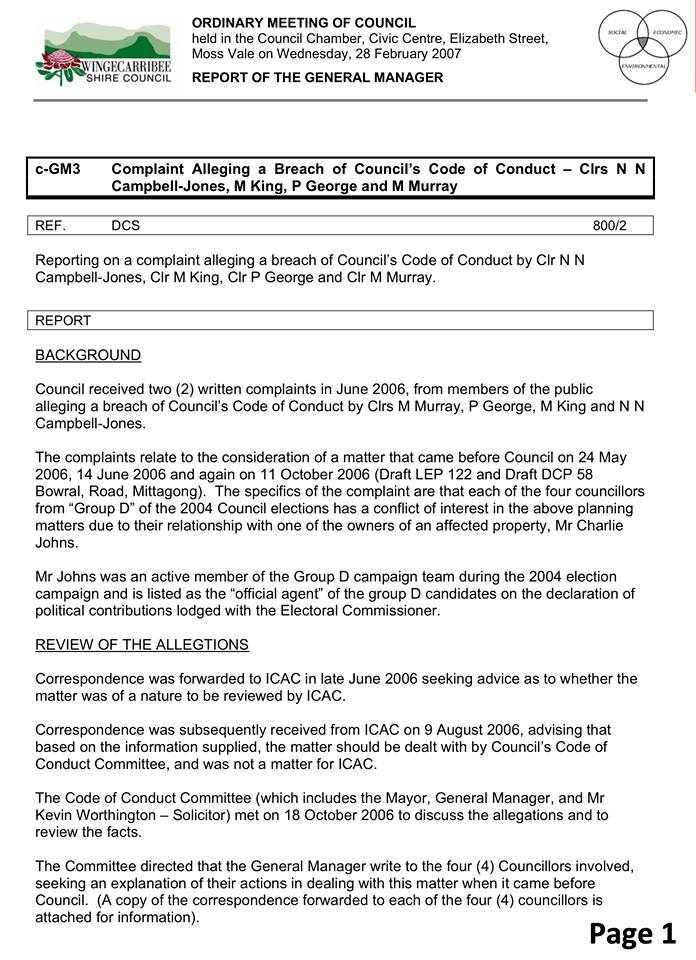 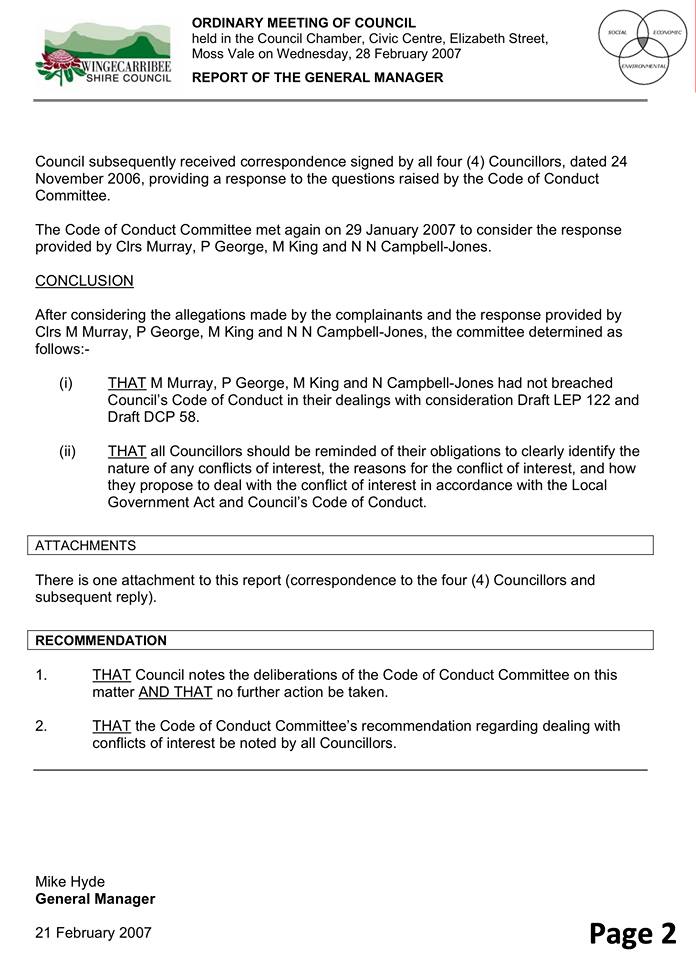 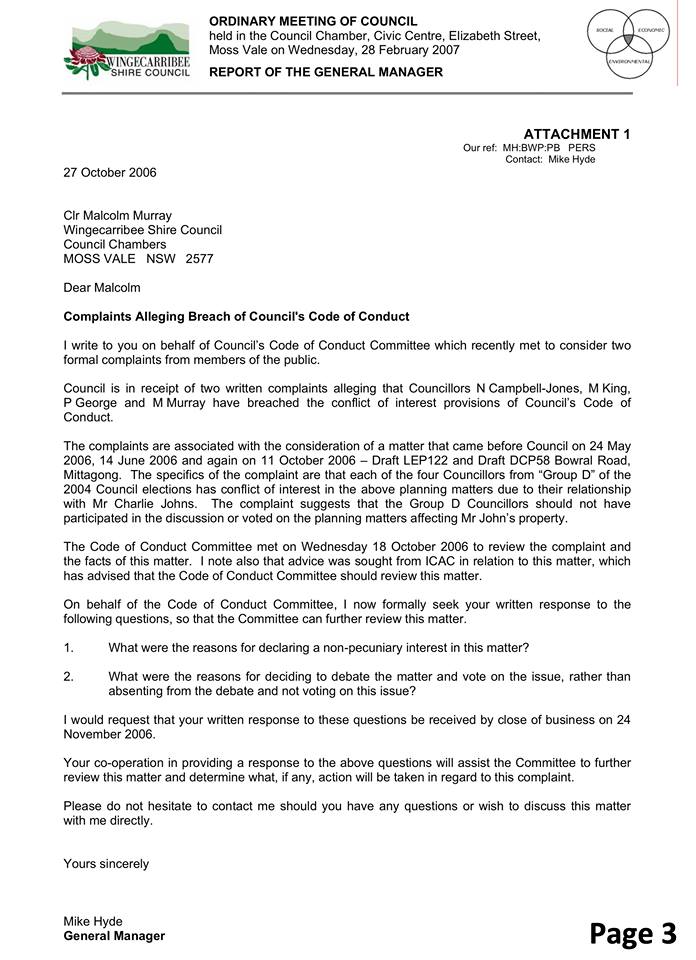 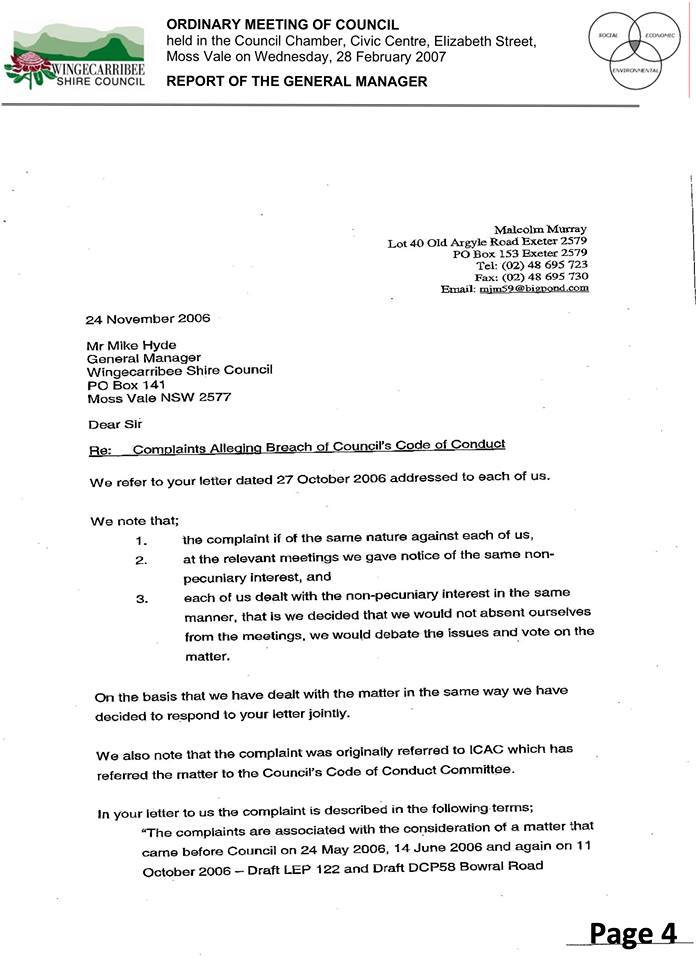 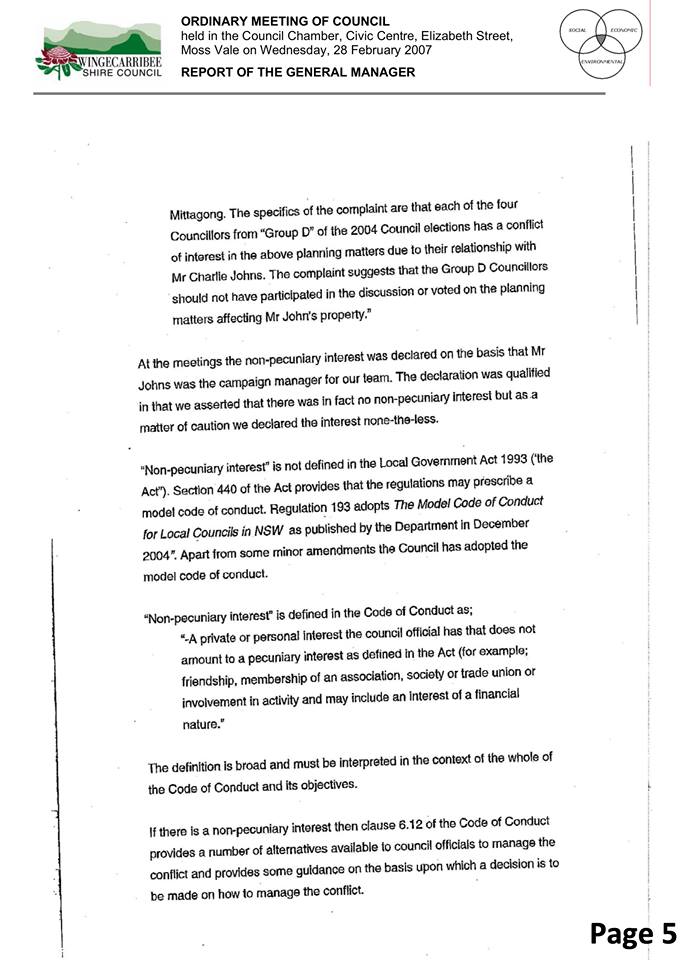 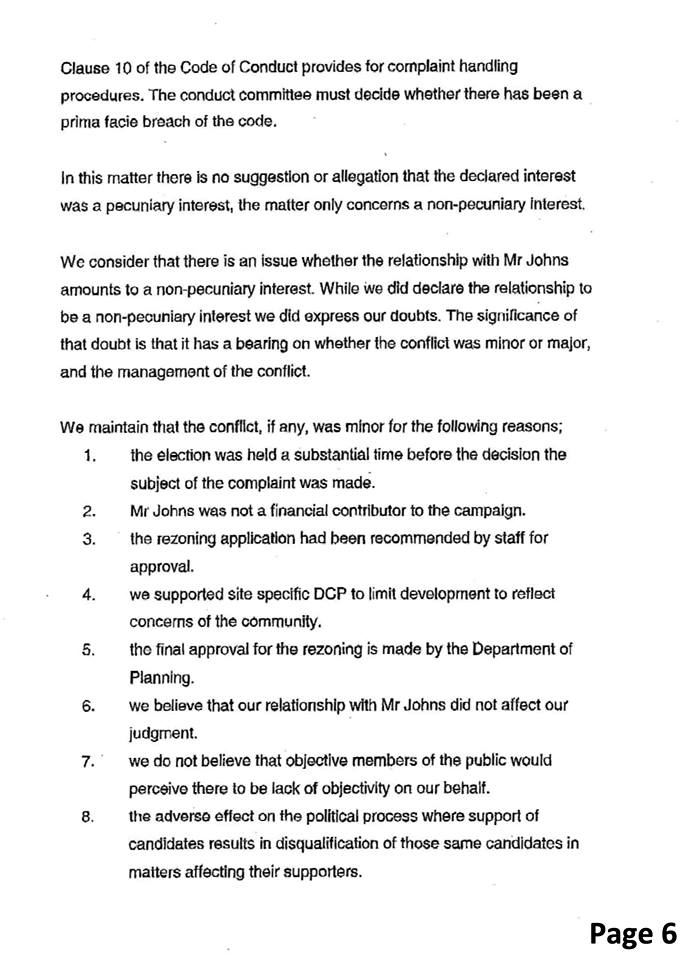 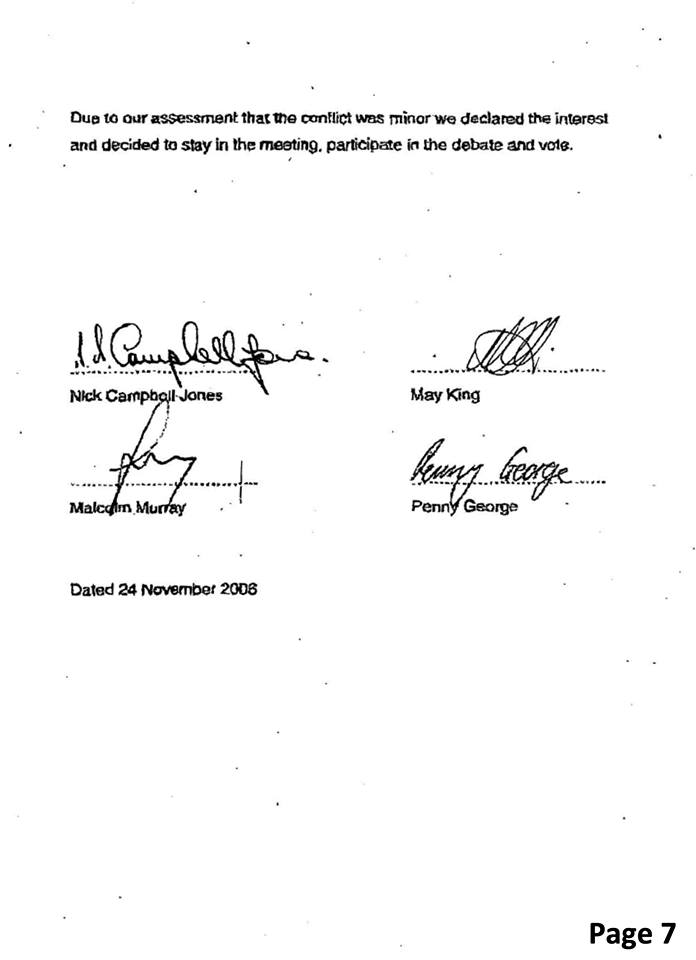