In March of 2018, I rang you at your home after finding your number in the phonebook. I told you who I was and how I was being maliciously and vexatiously sued for defamation by two of your colleagues, Duncan Gair and Garry Turland, after I called them out for corruption.

You replied that it had nothing to do with you because it happened before you were elected to council.

I corrected you by saying that it was still an ongoing matter, and I stated that I wanted to show you evidence of the councillors’ corruption.

I then pointed out that as an elected council official, you were obligated to acknowledge and address my credible reports of corruption, based on your sworn oath to uphold the probity of council while maintaining its zero tolerance towards corruption policy.

But before I could finish saying this, you hung up on me mid-sentence.

In October, 2018, you wrote a letter to the editor of the Southern Highland News and you made this remarkable statement (see attached).

“To my dismay, I’ve discovered some people in our community have a pathological dislike of council, of some staff and councillors in particular. Accusations of corruption, incompetence, nepotism, and such are shared among this ilk. Certainly this and worse has been said to me but I have seen evidence of none.”

Clr Markwart, you are a liar and a fraud, and not only have you brought the Wingecarribee Shire Council into disrepute, you are in clear violation of the Code of Conduct regulations governing councillor behaviour – you have blatantly deceived the community in the public forum.

I attempted to provide you with undeniable proof that Duncan Gair and Garry Turland were guilty of long-term systemic corruption, evidence of which is now coming to light, and which has been made available to Wingecarribee Shire Council and the Independent Commission Against Corruption.

In our phone call of March 2018, you demonstrably failed to address my serious accusations, and I call upon you to immediately stand down as a councillor pending a full and independent investigation into your failure to confront evidence of the corruption, and your failure to act upon it accordingly.

On 27 June, 2018, Clr Turland unlawfully directed councillors and senior managers to sign a statutory declaration regarding a matter totally unrelated to council business. The matter referred to a letter I'd written to Clr Turland’s wife, Heather, and which was private and confidential correspondence. Without my permission, and in an unlawful attempt to smear my name and character, Clr Turland forwarded the Heather Turland letter to all councillors and senior managers via email. This direct contact with councillors and staff is a serious offence, and it's in clear violation of Code of Conduct regulations governing councillor behaviour. Clr Turland then compounded his offence – constituting systemic corruption – by directing councillors and senior managers to sign a stat dec forbidding them to discuss the contents of the letter with anyone, and swearing them to secrecy with regards to the correspondence. This attempt by Clr Turland to cover-up serious and credible reports of his corruption is criminal in its intent. The fact that you, Clr Markwart, signed the stat dec makes you complicit in such criminal conduct, and I will be exposing you for corruption in the public domain, as well as informing The Greens hierarchy, both State and Federal.

According to the Local Government Act with regards to Code of Conduct regulations (updated at WSC in June, 2019), the following legislated rules apply –

Use of council resources
• 8.13 You must use council resources ethically, effectively, efficiently and carefully in exercising your official functions, and must not use them for private purposes
At a council meeting on 10 October, 2018, and after Clr Turland had attempted to coerce Clr Scandrett into signing the unlawful statutory declaration 5 times over 5 council meetings after initially bringing the document to the council’s attention on 27 June, 2018, Clr McLaughlin made the following Dorothy Dix statement as part of General Business.

Clr I M Scandrett asked why this was not raised in Business Arising. He advised that the Statutory Declaration was from Clr Turland relating to an email sent by Clr Turland to staff and councillors on official Council email but relates to a private matter that has nothing to do with Council.

On 25 July, 2018 (and at the meeting that followed), Clr Turland once again called on Clr Scandrett to sign the statutory declaration in open council, and by directing Clr Scandrett to sign an unlawful and unethical document, Clr Turland has committed the very serious offence of systematic corruption based on the ICAC Act of 1988. Such illegal action is also in contravention of the council’s charter, including the maintaining of council probity – accountability, transparency and integrity.

On 8 August, 2018 (and at the meeting that followed), Clr Turland directed Clr Scandrett by asking “Is (he) prepared to sign the statutory declaration?” As a further indication that Clr Scandrett was not prepared to address any private matter before council (that wasn’t council business), he declined to answer. Clr Turland’s ongoing and unwanted harassment of Clr Scandrett to sign what was an unlawful document constitutes further systemic corruption, and abuse of power by a councillor.

On 22 August, 2018, (and at the meeting that followed), Clr Turland continued to commit a serious Code of Conduct violation constituting systemic corruption by once again directing Clr Scandrett to sign the statutory declaration, by asking “Is he prepared to sign it now?” Clr Scandrett declined to answer and advised that "this is not the business of Council” (in a further attempt by Clr Scandrett to inform the council, councillors and senior management, that bringing private matters before council constitutes a Code of Conduct violation – which was promptly ignored by all officials present, a very serious offence).

On 12 September, 2018, (and at the meeting that followed), Clr Turland continued his harassment of Clr Scandrett with regards the signing of the statutory declaration with the following statement –

Clr G M Turland referred to Clr G M Turland referred to Business Arising on page 4 and advised that he had asked Clr Scandrett on three occasions to sign a Statutory Declaration that he [Clr Scandrett] had never provided personal and confidential information to the media and the general public. Clr Turland stated that it was the business of Council, and asked Clr Scandrett if he would sign the Statutory Declaration as he was the only one who had not signed it.

Clr I M Scandrett advised that there was a continual pattern of questions to him about matters that were not the business of Council and that, in this particular case, the matter related to an email forwarded by Clr Turland and it was not a matter of Council. He stated that it was not a matter that he should be called out publicly on, as it related to a personal matter of Clr Turland. He asked if the matter could be brought out in the Minutes, and he stated again that it is not part of Council.

Clr Markwart, not only did you sign an unlawful document that was in clear violation of Wingecarribee Shire Council Code of Conduct regulations, you also propagated Clr Turland's systemic corruption by allowing the matter of the statutory declaration to come before council on 7 occasions, without once speaking out against its illegality.

Here’s an article by the Greens that stipulates its very strict policies regarding corruption at local councils – https://greensoncouncil.org.au/project/ ... -councils/

Clr Markwart, your failure to address my initial reports of corruption, and your complicit conduct in propagating corruption at council, means that you are in violation of your own party’s anti-corruption policies.

Once again, I call upon you to immediately stand down as a councillor pending an independent investigation into your conduct and behaviour as an elected official, one in which you swore an oath to uphold the probity of council, in that you would always act in the best interests of the shire.

I’d also like to let you know that I’ll be suing you for substantial damages as part of a civil action for your conduct and behaviour regarding the signing of the statutory declaration and its aftermath. You have committed a string of very serious offences, all of which constitute systemic corruption.

I must warn you, and based on the balance of probabilities, if I’m able to prove in civil court that you have acted unlawfully in your role, then you won’t be covered by the council’s public liability insurance, which only covers councillor conduct that fully complies with the council’s charter, the council’s zero tolerance to corruption policy, the council’s Code of Conduct regulations, and the maintaining of council probity – accountability, transparency and integrity. This will mean that any successful claims of damages I make against you for illegal behaviour, will have to be covered by you personally.

I therefore ask you to seriously consider what I’ve stated above, and I encourage you to act in accordance with the oath you swore when first elected as a councillor – to uphold council probity, and always perform your duties with the best interests of the Wingecarribee Shire in mind. 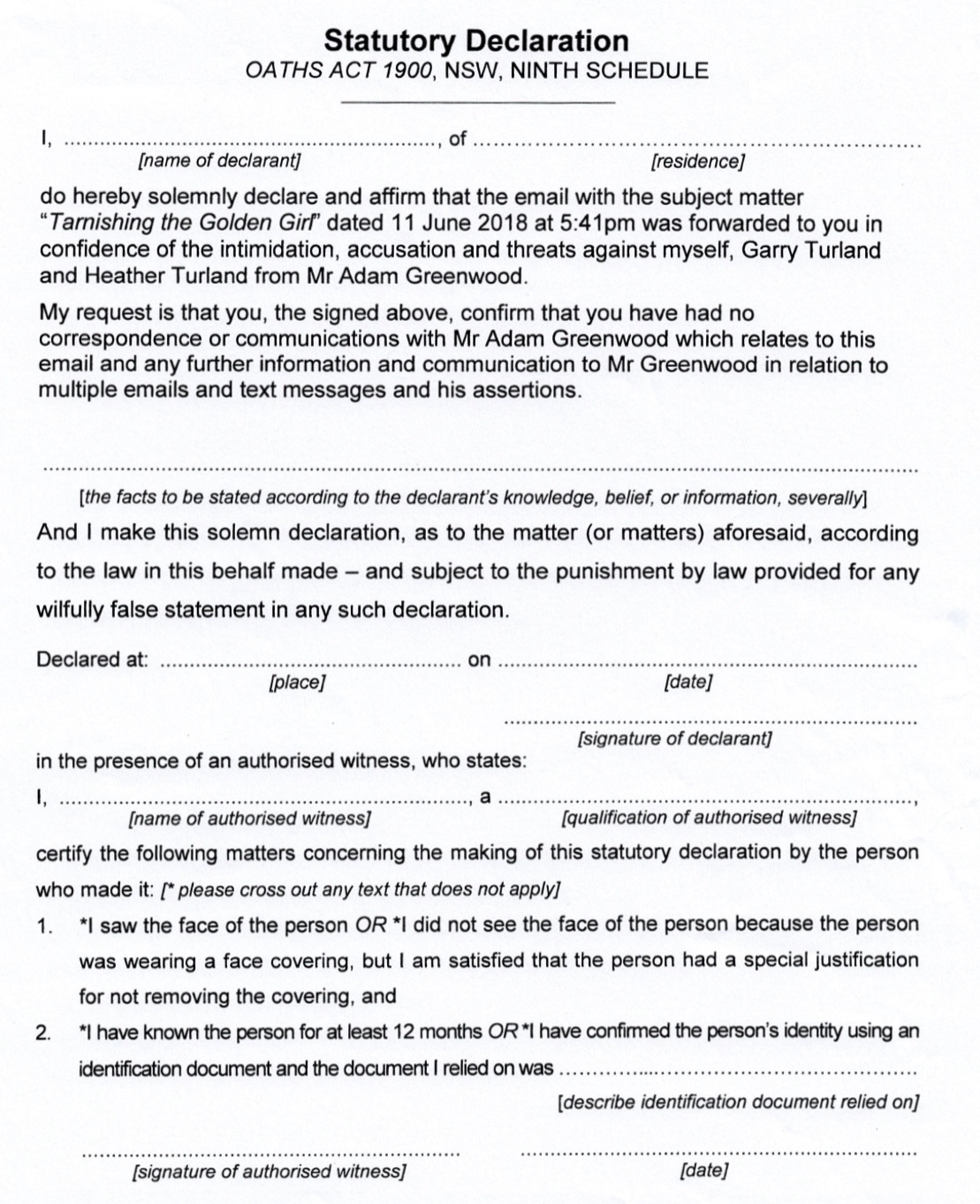