Looks like Defying Defamation has finally had a win.

After recently exposing Heather Turland for consorting with crooks by doing business with a known criminal, Chucky Jones, the pair have since had their names pulled from a $20,000,000 development in Bowral, one that’s been mired in controversy and corruption from its very inception.

"The Heather Turland development has cost ratepayers hundreds-of-thousands of dollars,” said a former council worker who was recently let go for being too honest and above board. "Heather and Co took their DA to the Land and Environment Court, and that cost alone for the community was well over $200,000."

As can be seen in the attached photo, the multi-million dollar development, Oak Bowral, was at one stage proudly represented by Heather Turland and Chucky Jones. But after a year long investigation by intrepid journalist, Adam Greenwood, Chucky Jones was exposed as being nothing but a crook, forcing Heather Turland to immediately suspend Jones from the Oak Bowral sales team.

“Heather Turland was mortified when she saw the online report about her close friend being a common criminal,” said a long-time associate of the former Olympic athlete. “Not only did she have Chucky’s name scrubbed from the advertising on the fences surrounding the development, she also chose to have her own name removed to try and eliminate all prior association with the rotten crook.”

Chucky Jones was also recently outed for conspiring with local bent coppers to have Adam Greenwood convicted and sentenced for stalking and intimidation after he confronted Jones with evidence of his corruption. The investigative journalist was stitched up on fabricated charges, ones that were initiated by Chucky Jones, and which had the full support of a corrupt senior constable, Susan Devlin. An internal investigation by officers of the executive branch is currently underway.

Please forward this email/posting to all Highlanders who want to help clean up this town. The more people that know of the entrenched corruption, the more chance we have of tackling the problem head on. Enough is friggin enough! 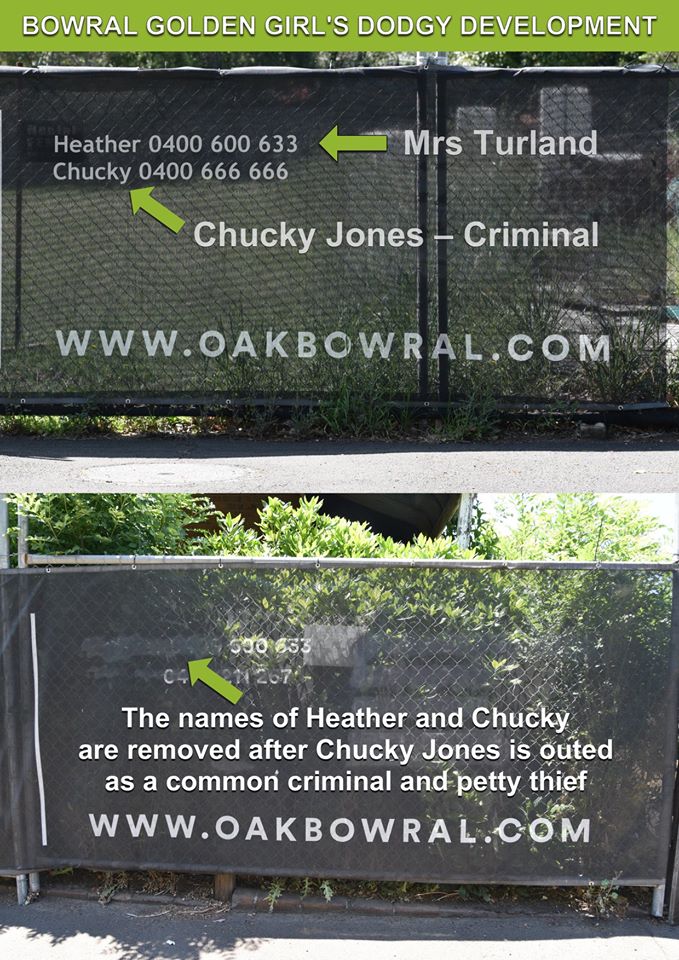