A few members of the community are calling the supposed arson attack on the 1st of April 2021 in Moss Vale on a wooden building near IGA a "Jewish Stocktake."

Is it a coincidence just as he got sacked from Council it happened?

The property was on the heritage list, so insurance payout would of been huge.

There are a few other events that coincide to this, especially talking to those in the know..... which leads me to expect it was an inside job... but that's just my opinion.
Government is Organized Crime. ALL RIGHTS RESERVED WITHOUT PREJUDICE. UCC 1-308
Top

Re: Gary Turland and his insurance job

A former deputy mayor currently under investigation by the NSW State Government has committed a major self-own.

Garry Turland was sacked as a councillor in 2021, and he’s currently the subject of a public inquiry looking into his 9 years as an elected official at Wingecarribee Shire Council.

On 4 April, 2022, and in an attempt to smear one of his political enemies, Mr Turland shared a post by Adam Greenwood which made serious allegations of corruption against the three time mayor, Duncan Gair (also sacked in 2021). Turland and Gair had a major falling out in 2020 due to their defamation action against Mr Greenwood, and the escalating rift between the pair is one of the major reasons the council was placed into administration.

According to Mr Greenwood, “Duncan and Garry’s litigation against me was illegal, and the defamation action was a brazen attempt to silence me from speaking out about their long term corruption. Three-and-a-half years into the court action, Garry got cold feet and wanted to pull out of the case because he knew the unlawful litigation could come back to bite them on the bum. Duncan Gair, on the other hand, wanted to push forward with the case because a backdown by the plaintiffs would expose the two councillors as malicious and vexatious litigants, which would also come back to bite them on the bum.”

As plaintiffs, Turland and Gair won the court action in late 2020 after Mr Greenwood ran out of money – having spent over $100,000 in legal fees over four years.

Garry Turland’s self-own occurred when he share a post by Adz Nauseam (Adam Greenwood’s parody name). The post accused Duncan Gair of receiving millions in kick-backs from the former owners of Coomungie, Murray and Jack Sowter. Coomungie is currently being developed as a housing estate worth $250,000,000. In the post titled, Community Conned by Coomungie, Mr Greenwood provides details of Mr Gair’s close relationship with the Sowter family, and his systemic failure as a mayor and councillor to declare the Sowters as a major conflict of interest (prior to the Sowters selling their land to Chinese interests for $80,000,000).

The Adz Nauseam post also alleges Garry Turland to be corrupt, and accuses both Turland and Gair of being members of the Bowral Mafia (a close knit group of local politicians and leading business people, all of whom are notoriously crooked).

According to a two time councillor who wishes to remain anonymous, “Garry Turland has leaked information about Duncan’s corruption to his Facebook page, after Duncan released a statement accusing Garry of being the cause of the entire council’s downfall. It’s basically a tit-for-tat. But what’s most extraordinary about Turland’s FB post – the Nauseam post he has shared makes very serious allegations about Garry himself, and right before he’s about to be called as witness at the hearings. He’s taken a pot shot at Gair, while at the same time, he’s shot himself clean in the foot.”

There’s other prominent members of the community who were just as shocked to see the Turland post.

“Garry and Duncan sued Adz Nauseam for calling them crooks and racketeers,” said one major stakeholder, “and now, in an attempt to save his own skin, Garry’s using Adz Nauseam’s own allegations against his one-time fellow plaintiff, Duncan Gair. It’s a disgrace. Both councillors fought bitterly while on council, and now they’re battling each other in the media right before appearing under oath at a public inquiry. It’s baffling conduct by two people who were once a couple of sharp operators.”

The post by the former deputy mayor has certainly appeared out of the blue. Prior to sharing Mr Nauseam’s post on the 4 April, Mr Turland had only posted 9 times since 17 July, 2017. In fact, the previous post on 1 April, 2021, concerned a suspicious fire that burnt down one of Garry’s properties in Moss Vale. The Channel 7 news report shows graphic footage of a heritage listed house burning to the ground. A councillor at the time, Garry became an immediate suspect, and the investigation into the alleged arson is still open.

According to a police insider, “The house was owned by Cr Turland (sic) and had no electricity connected at the time of the fire. Suspicions exist around the fire at this property given that Cr Turland had wanted to develop the property but had not been able to obtain approval to do so.”

The insider went on to talk about the suspicious conduct of the General Duties Supervisor, Sergeant Matthew McCarthy, who was rostered on that day.

“Sergeant MCCARTHY was on shift at the police station at Moss Vale. He made deliberate comments that he would be unavailable for the next few hours, as soon as his shift commenced at 6am. Soon after, at 6:42 am, the fire started at Cr Turland's residence at 1 Valetta Street, Moss Vale. It is standard operating procedure for Police supervises (sic) to compulsorily attend all house fires. When the fire was reported to police, Sergeant MCCARTHY declined to attend the fire and sat in the Moss Vale police station, sipping on a cup of tea. Some police have suggested that Sergeant MCCARTHY had prior knowledge of the fire and refused to attend the fire as he was aware that the residence was owned by Cr Turland.”

Adam Greenwood has been complaining about police corruption for years. As an investigative journalist, Adam was the first to expose and publish evidence of illegal ties between Inspector John Klepzcarek and Garry Turland.

In 2019, Mr Greenwood was framed by Inspector Klepzcarek and Sergeant McCarthy as part of conspiracy to stop the journalist speaking out about police corruption. The fabricated charges were initiated by Charles Frederick Johns, a close confidant of Turland’s, and a prominent member of the Bowral Mafia. Recently, the Commissioner of Police, Karen Webb, initiated an inquiry into the fabricated charges, and the Professional Standards Command is currently investigating the matter.

According to the same police insider (and regarding the fabricated charges), “(The) officer in charge of the investigation, Senior Constable Susan DEVLIN, was directed by Sergeant Matthew MCCARTHY (on the direction of Chief Inspector KLEPZCAREK) to initiate the charge and an APVO against Mr Greenwood. If Mr Johns was so intimidated, he could have applied for an APVO through the local court himself, at the time of the incident.”

The insider went on to say, “Police do not normally apply for APVO’s unless the situation is very serious” and “The APVO taken out against Mr Greenwood was initiated by the NSWPF on behalf of Mr Johns and the final order was issued in November 2018, five months after the incident occurred.”

Susan Devlin has since left the police force after being hounded out by Klepzcarek and McCarthy. This occurred after “Sergeant McCarthy directed Senior Constable Devlin to falsely charge Mr Greenwood a second time, but she refused.” The refusal sealed her fate, and soon after, the 17 year veteran resigned in shame.

Garry Turland’s appearance before the Public Inquiry Hearings won’t necessarily expose his criminality, because corruption by a councillor doesn’t fall within the Inquiry’s Terms of Reference. But there’s still plenty of aspects of his crooked conduct that will fall within the terms, and in all likelihood, the commissioner will refer allegations of Turland’s corruption to ICAC.

Garry Turland has been called to appear before the Public Inquiry in the final week of the Hearings. 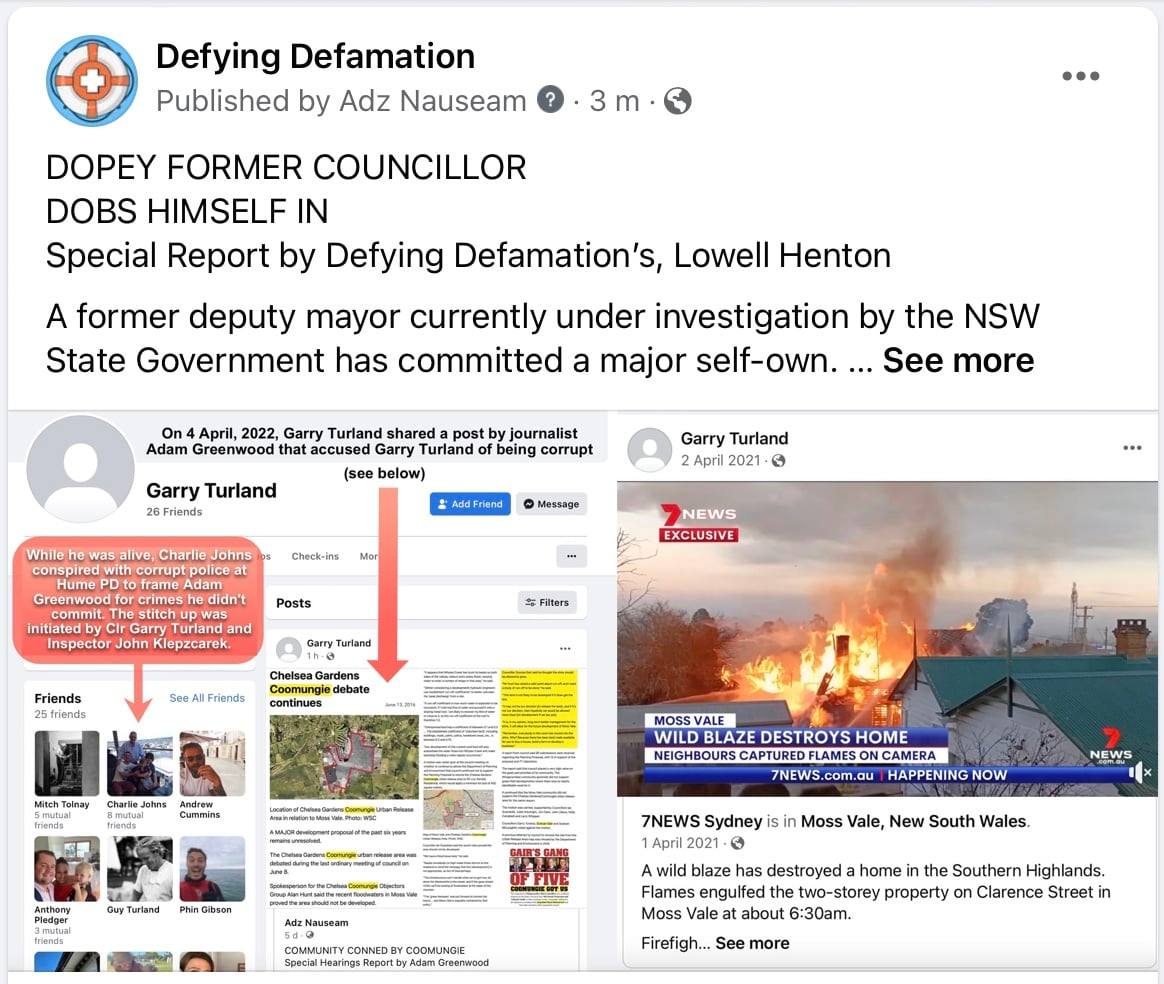