Defying Defamation for exposing the zionist criminals in Wingecarribee Shire Council. All articles have been copied and pasted from social media pages without permission.
Post Reply
4 posts • Page 1 of 1

Two years into the 2012-2016 council term and the crooks weren't having much luck in trying to frame Uliana for asbestos contamination and illegal earthworks, so they tried another dirty trick.
On 23 July, 2014, they attempted to bully Uliana into quitting council using dubious statistics that falsely claimed he’d failed in his role as councillor.
The attached request for Uliana to resign was put together by Charlie Johns (in all likelihood). Over the years, Johns had submitted scores of complaints using similar facts and figures to harass and malign people. In this instance, the mafia would’ve called on Charlie to “trawl through the attendance notices so that we can try and get Uliana sacked for never turning up to committee meetings”. Or words to that effect.
For many years, Charlie Johns used similar tactics in the dozens of poison pen letters he wrote to councillors and business people. For instance, in an attempt to bully and intimidate our shire leaders, Johns would anonymously contact the elected official and menace them with threats to their political careers and livelihood.
A prominent victim of Charlie’s poison pen letter campaign was Jim Mauger, a councillor from 2004 - 2012. Over a two year period, Charlie sent Jim numerous anonymous letters – with dire threats – if he didn’t stop complaining about council corruption.
Clr Mauger contacted the police about the poison pen letters, and when officers arrived at Jim’s place to investigate, he provided them with evidence of Charlie’s illegal conduct (threatening an elected official with menace). Unfortunately for Jim (and the Southern Highlands’ community in general), the senior constable in charge of investigating the matter was a bent cop, and rather than undertaking a fully fledged investigation based on probable cause, the crooked constable whitewashed the complaint, effectively covering it up forever. In fact, the same officer was contacted by Jim on two more occasions (when he wanted to complain about further threats by Johns), and sure enough, those complaints were also left hanging.
They were never properly investigated.
In 2018, Johns conspired with a corrupt officer at Hume District Police Division by having me charged and convicted for a crime I didn’t commit.
The same officer was the senior constable who failed to properly investigate Jim Mauger’s complaints against Charlie Johns five years earlier.
One moment the senior constable is protecting Charlie Johns from investigation after a complaint by a councillor.
The next, she’s charging a journalist for a crime based on a complaint made by Charlie Johns.
No wonder the local police division failed to properly investigate my own complaints of police corruption involving Charlie Johns. The evidence was so overwhelming, it was either bring in the Professional Standards Division to investigate the matter (thereby exposing the true extent of corruption at the Hume District Police Division), or whitewash and cover-up the complaints by Adam Greenwood (while also stitching him up on further fabricated charges).
The NSW Police Force chose the latter option.

The Uliana-Gate article was published 5 years ago.
It proves that Charlie Johns engaged in corrupt conduct in conjunction with other corrupt individuals.
Even though Charlie Johns was outed for acting criminally, nothing happened. Colleagues of Councillor Uliana should've spoken out about the witch-hunt Charlie Johns conducted against Uliana, but none of them ever did.
Clr Larry Whipper never said a word.
Clr Ian Scandrett remained mute.
Clr Holly Campbell was suspiciously quiet.
Clr Jim Clarke was silent.
And Clr Graham McLaughlin was part of the witch-hunt.
The full page article contains an email sent by Charlie Johns to a handful of the crooks (including Clr McLaughlin). In the email, Johns admits to breaking the law –
"Mean while (sic) John Uliana is the weak link at council. We need to keep the pressure on to add to his current self made problems & pressures & maybe there will be a bi-election anyway." (Charlie Johns alludes to Uliana's self made problems that were actually caused by Charlie Johns himself, as part of a vendetta by the Bowral Mafia. The mafia want to force a by-election so that the crooked coalition can regain control of council. The type of conduct Charlie Johns is advocating for constitutes systemic corruption – and this is a crime according to the ICAC Act of 1988).
"John (Uliana) was never going to vote with us, look what happened with the Committees, he was told how to vote. Lets see what happens when the report on asbestos on the golf course property comes up. Remember its always about John." (In fact, it was actually about the Bowral Mafia regaining control of the council. Charlie Johns admits that Uliana was confronted about voting with the crooked coalition, which Uliana refused to do. There was no asbestos found on Uliana's property after an exhaustive investigation by council, and at a cost of $50,000, but at the time of this article being published, Charlie Johns and Co were still hoping that asbestos would be found, something they could use against Uliana in attempt to have him removed from council. Johns admission that Uliana "was told how to vote" constitutes a crime according to the ICAC Act of 1988).
It should be noted that the email written by Charlie Johns was addressed to the following crooks –
Councillor Graham McLaughlin
Former mayor and councillor, Nick Campbell-Jones
Long term supporter of the crooks, Terry Oaks-Ash 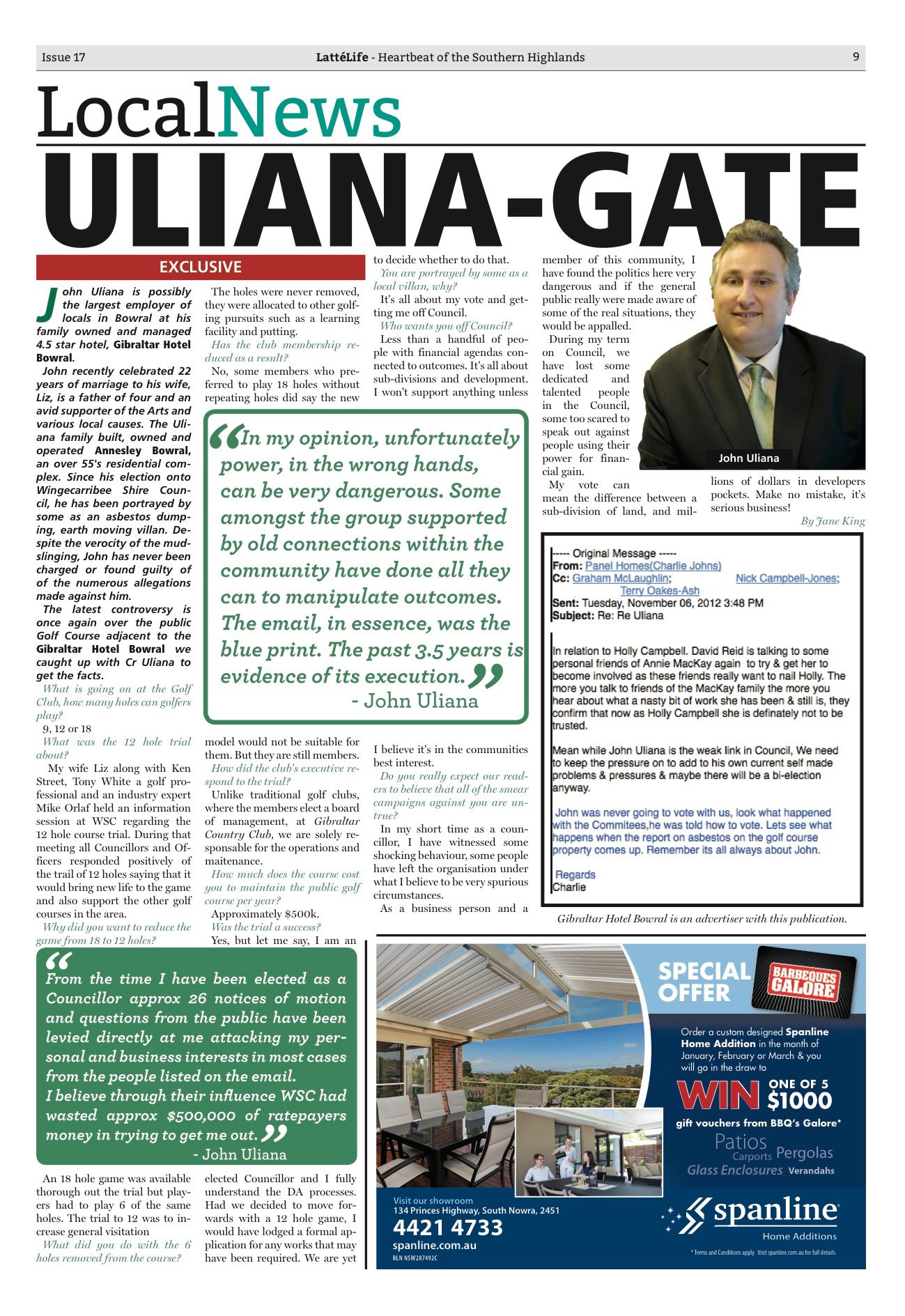 From the very beginning of John Uliana's term of office, the Bowral Mafia went after the freshman councillor with a vengeance. There was no asbestos on the golf course leased by Clr Uliana.
As it states in the original motion, the alleged asbestos was an operational matter and would only be reported back to the General Manager if the matter was warranted. It wasn't. There was no asbestos.
At the start of the witch-hunt against Uliana, Ian Scandrett was one of the crooks (after being coerced into joining their ranks at the beginning of his term). This is why Ian added an amendment to the attached motion "that all files relating to the property ... be made available to Councillors". Clr Scandrett was instructed by the mafia to secure as much information about Uliana's property as possible, so that the crooks had more opportunities to stitch Uliana up as part of the vendetta. The amendment was voted down, and Scandrett was recorded as being a dissenting vote "in respect of this motion". It wasn't enough that he was supporting a motion to frame a fellow councillor for something he didn't do, he wanted his unlawful attempt to frame Uliana to be recorded for all the world to see, even though his motion failed.
In the most amazing irony, Scandrett and the Bowral Mafia ended up having a major falling out, and for most of the council term 2016 to 2020, Clr Scandrett was the victim of a witch-hunt by the very crooks he'd initially jumped in bed with. But even though Scandrett was subjected to years of abuse by the mafia, he never once raised the matter of John Uliana being the victim of a witch-hunt.
That's because Ian Scandrett's role in the Uliana witch-hunt would come to light if he raised the matter in open council. 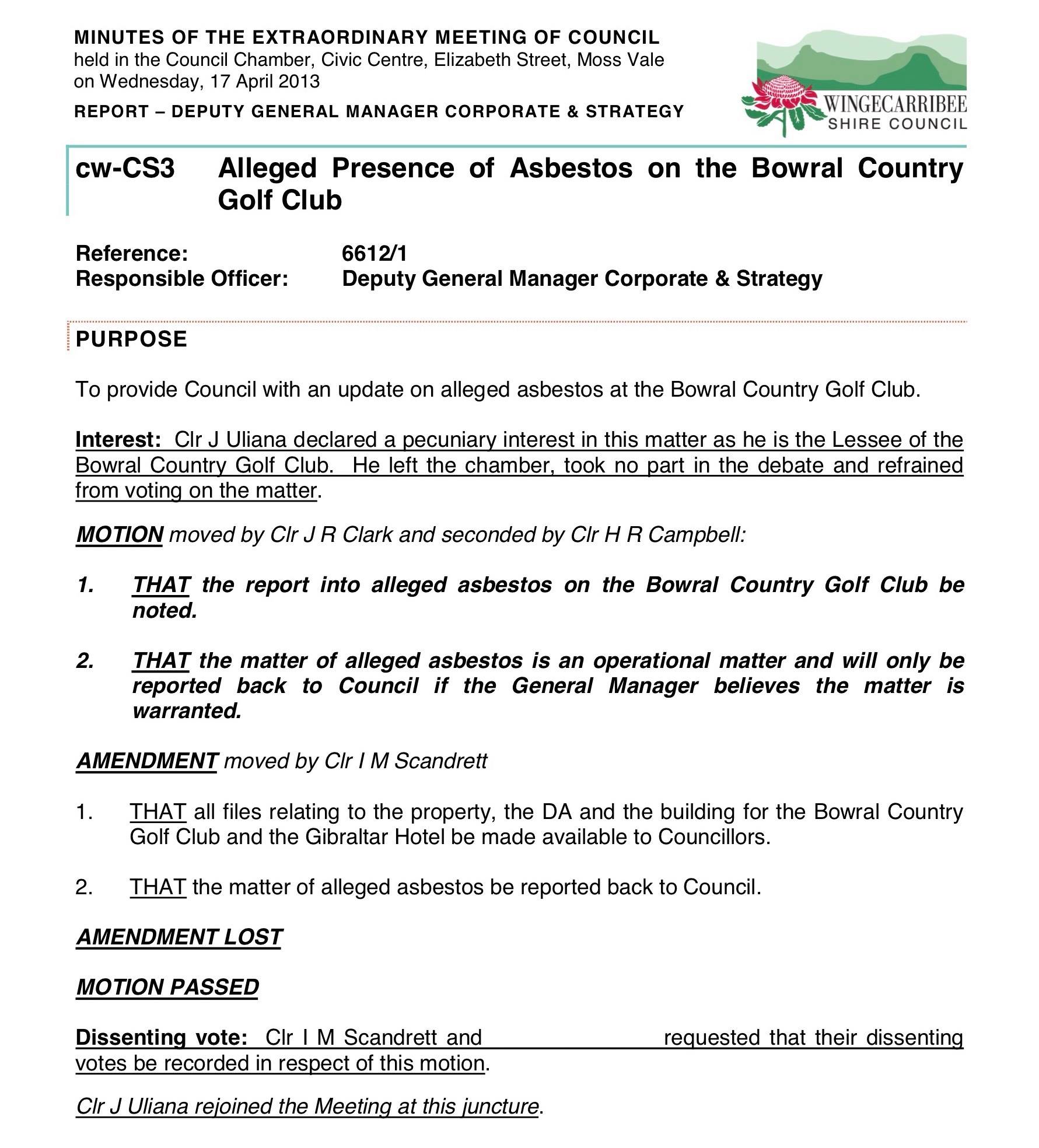